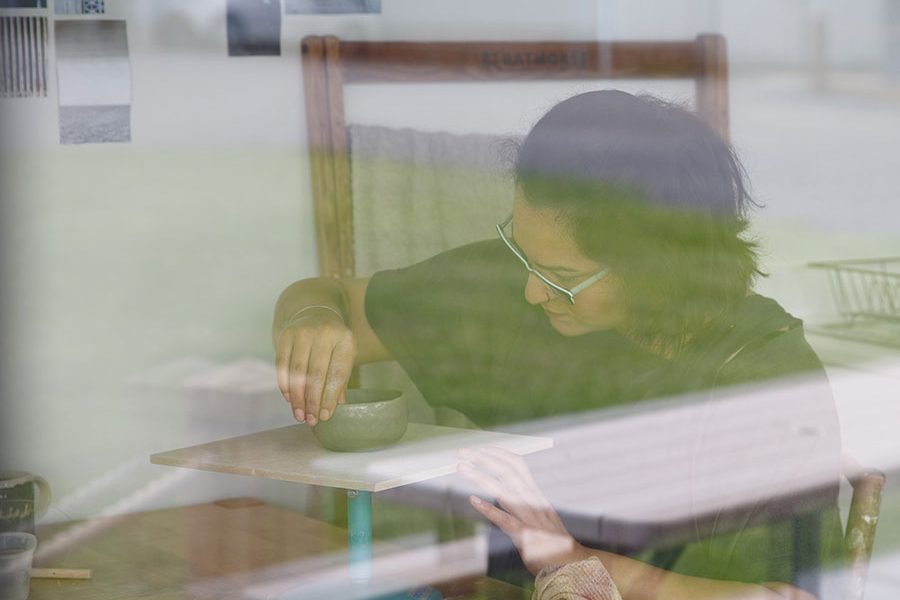 Inspiring women are go-getters. They make things happen. They live life with no regrets. They are learning about themselves and reaching their full potential. They are not afraid to take risks and just go for it, like Suky Rai from Lu Kee Su Ceramics. Today we chat with her about discovering her true calling and her journey into setting up and building her business, while freelancing as a graphic designer.

What has been your journey so far?

My journey is a total cliché but I’ve always been a designer and a maker of sorts, I just didn’t always know it. Numbers, letters and names have never been something I’m good with. Instead, creating and making has always been second nature to me. I hope that doesn’t sound arrogant, I don’t mean it to and I didn’t and have never claimed to be any good, but it’s just always been something I have never had to try hard at, or over think, like I did with other typically academic subjects, if that makes sense?

My earliest memories are of me being at my happiest making; whether it was bags, bakes, cards, toys, knitted gifts, clothes, scrunchies, wristbands as far as the eye could see and packaging, that was a real thing of mine. I don’t know what I was pretending was in there but I loved designing and making packages “for stuff”. I remember being around 8 or 9 and pretending I had a shop and needing to give it a name, design the shop front, the logo, the bags and the packaging.  I should have been out playing,  I know,  but this stuff truly made me happier. Don’t get me wrong, it was all absolute crap in terms of design and being useable but it made me happy and what more can a kid ask for than that, right?

Anyway, I pretty much carried on doing things like this until the age of 13 where, in an Art and Design class, we covered the topic of graphic design and everything fell into place for me. I never knew what I enjoyed doing had a name or was a real thing. Anyone could pursue as a career but after that day I made sure I did everything I could to do what I loved, and become a professional graphic designer. And I did.

Can you take us back to the time when you decided to set up your brand?

So after University, a 12 year career in the industry followed but the higher up the professional ladder I climbed, the less hands on I felt I could be creatively. I also realised that I’d started doing what I did when I was young again – looking for excuses to physically design and make “stuff”, experimenting with lots of different mediums in the process, for no real reason, just that it felt fulfilling to me in discovering something new with a physical and tangible outcome.

Eventually, it hit home that whilst graphic design had fulfilled all of my 2 dimensional creative needs, it didn’t scratch the surface when it came to seeing and touching a physical design made by my hands alone and not through the use of a programme and pad that allowed me to manipulate and dictate the specific positioning and placement of design elements. I missed the imperfections, the spontaneity, the physical mark-making and the tactile nature of hands on making that years of self-directed and single-minded focus on being a graphic designer had resulted in.

I still love graphic design, I can’t imagine a day when I’ll ever stop being a designer. However, after discovering the world of ceramics in 2015 following six months of weekly pottery lessons, everything changed for me. I don’t know how to describe it but I’d finally found the “it” that I was looking for. So I set up my own studio, practised and experimented like mad until I found a way of making that feels natural to me and works with my back issues and not against them. I’m now in the very lucky position of being able to continue freelancing as a graphic designer and designing, making and selling my own collections of ceramics in small batches and as one-of-a-kind originals. I especially love working on commissions! 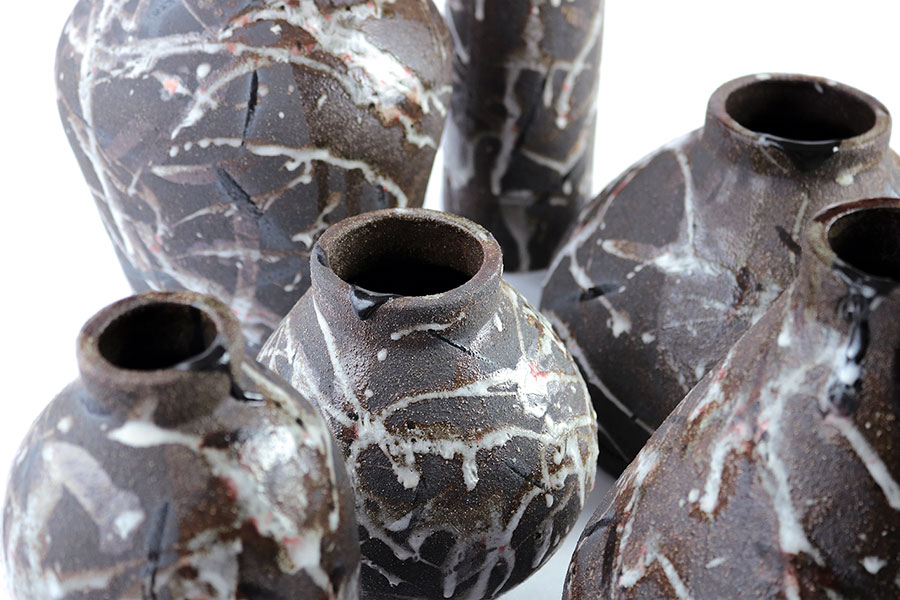 What is the concept and meaning of Lu Kee Su? What is different about it?

Well, there’s no great concept behind the name that’s for sure. “LuKeeSu” is actually a combination of my name and my dogs’ names, Ludo and Okee! Yup, as silly as that. I decided to use it as I wasn’t sure if I wanted to use my actual name back then and they came into my life around the same time as the idea of having my own business formed. And so I wanted to make sure I included them in the naming of it. They’re with me all the way, through every single stage of operating my tiny business that makes them part of the “team” in my book, even if all they do is mostly sleep!

What’s the biggest challenge and how did you overcome it in terms of your business?

Hands down my biggest challenge personally and professionally was completely bodging up my back. I’ve always had back problems but slipping two discs, one of them to both sides of my spine and being left undiagnosed for eight months totally threw several spanners in the works in terms of the business I had at the time and freelancing as a graphic designer. I was fairly immobile for a year and the second year was taken up by a natural and slow healing process as I elected for non-surgical recovery which meant very little progression with either career.

I had to close down the first business, which was a contemporary handmade offering of lifestyle products that was doing really well and stopped freelancing all together. I’m not the most patient of people, so it was really very hard for me to accept what was my reality, especially in that first year, mostly because I didn’t know what the problem was for such a long time. I decided to use the time out as an opportunity to fully immerse myself in the world of ceramics, which I had started doing for months prior to my back giving up on me. I quite literally lived and breathed from this point on, I couldn’t do anything else after all. I read loads of books, watched a hell of a lot of tutorials and practised by butt off. I even had a bag of clay by my side so I could practise pinching and coiling lying on my back. The challenge for my ceramics business following this was being restricted to only ever hand building ceramics as I can’t use the wheel anymore. In reality, that was the silver lining to my particular cloud. I found out during this time that I absolutely love hand building and actually can’t imagine ever wanting to use the wheel anymore. Sure it’s slower and I can only make a fraction of what a potter could throw in the same time, but I love it and truly wouldn’t operate any other way, even if I physically could! 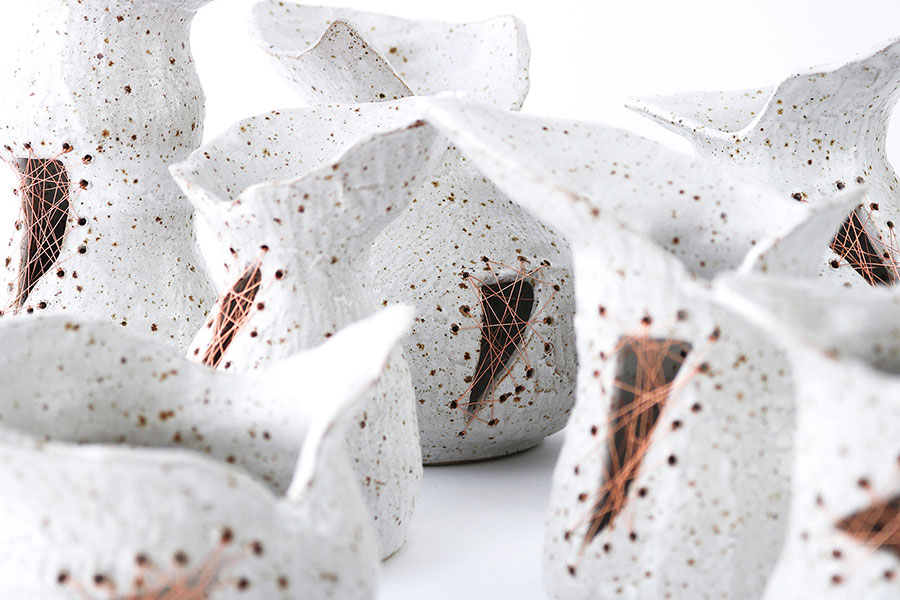 How do you cope with setbacks?

Well, they annoy and frustrate me in honesty. I’ve learnt that everything really does happen for a reason. The dodgy back saga has changed the way I see and react to circumstances out of my control a lot. Problems, setbacks, whatever you want to call them, have taught me more than anything that’s gone according to plan and at the end of the day, trying times are mostly an opportunity to re-evaluate and change and that’s not a bad thing. It’s a good thing in fact, or at least it will be when you get out the other side. Ultimately, it can be really freeing. It’s just a matter of riding it out and keeping a positive, open mind regarding any opportunities or breaks along the way. So yeah, I guess the way I cope is by not planning too far ahead anymore, you never know what’s going to happen and where’s the fun in having everything planned anyway?

Where do you see yourself in 5 years time?

Haha, see above! No, in fairness I do have a loose plan based on where I’m at now in my head. It goes something like this; in 4 years time, when I hit the big 40, I’m going back into formal education to develop and push my body of work as a ceramist. There’s a particular concept I really want to explore and I think I’ll only be able to do it proper justice through dedicated time and exploration that I won’t be able to achieve while working two careers alongside each other.