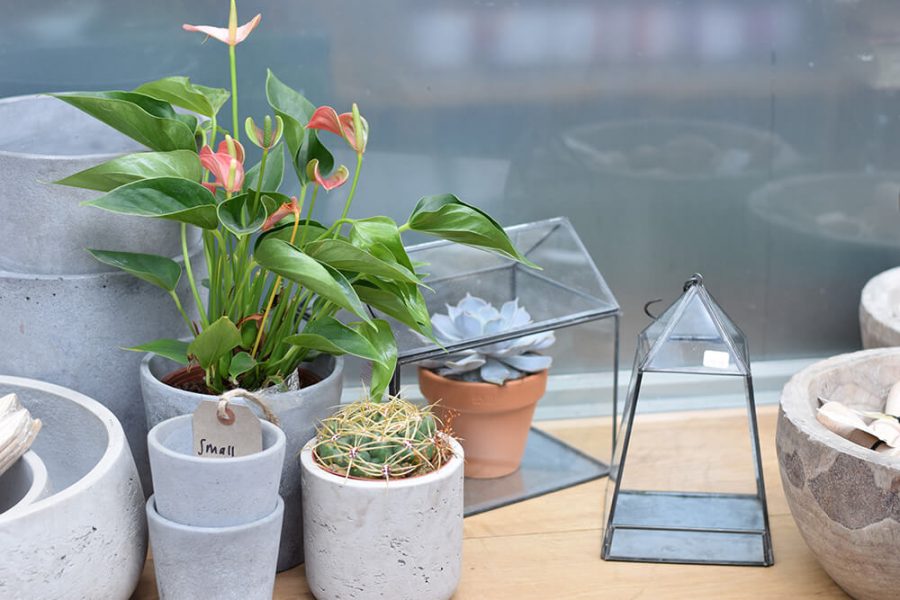 This week I’m introducing you to the beautiful little homeware retailer and culinary delight that is known to locals as Cornercopia. Based in the heart of South West London, Anne Fairbrother and her business partner, Ian, set up an eatery about 8 years ago in a small space that had not been rented for 15 years with the intention of dishing up locally source delicious food. However, things took a slightly different turn, when diners soon started commenting on where they could buy the cutlery… and then their glasses…and then their plates. With increasing demand and curiosity as to where Anne was sourcing her homeware items, Cornercopia soon became a hotspot for classic, well-made and designed homeware goods. Read on to find out how Anne’s journey begun and the interesting stories behind the items she sells. 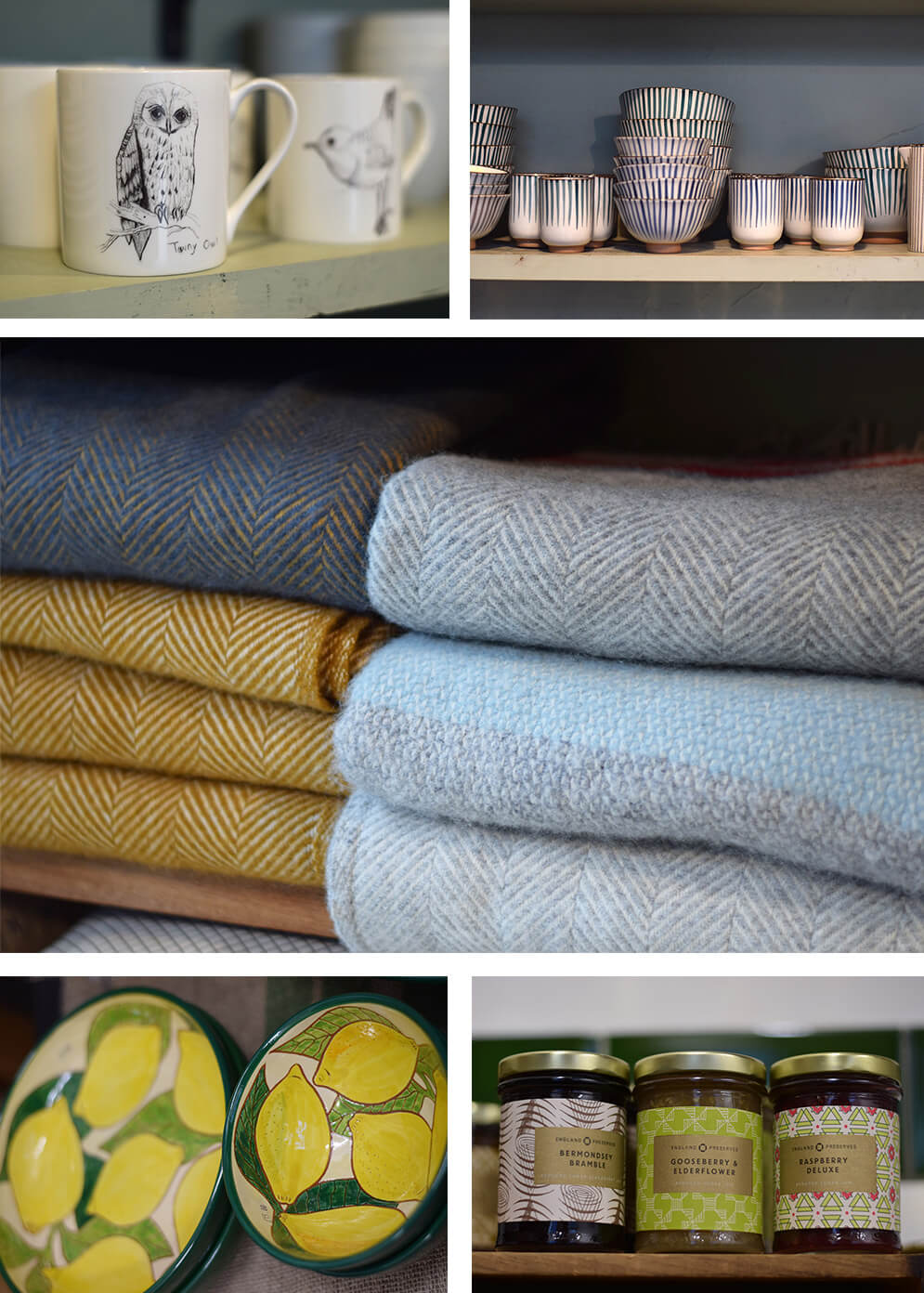 1.  What is the story behind Cornercopia?

It was set up in 2009 as part of an empty shops project. We put a proposal up for a shop that was all about local food things like jams, chutneys, preserves – things made by people very local to Brixton. It then turned into a restaurant and people seemed to really like the aesthetic of the restaurant, they liked the knives, forks, plates, tables, chairs etc and wanted to buy them. So we started selling things we used in the restaurants and had one or two shelves in our little restaurant dedicated to homewares. We then found that we really enjoyed finding and sourcing homeware goods and people liked our taste too, so it just came from that. We’ve naturally expanded more into homewares and now Cornercopia is predominantly homeware and things for the kitchen, but we still have a food section.

2. How would you describe the style of Cornercopia?

Our motto is ‘everything is very useful, beautiful and curious’ so the style is a little bit towards utilitarian but I would say things that are well designed, traditionally designed and designed to stand the test of time in terms of aesthetics and functionality. I think you could also call Cornercopia’s style ‘modern rustic’. 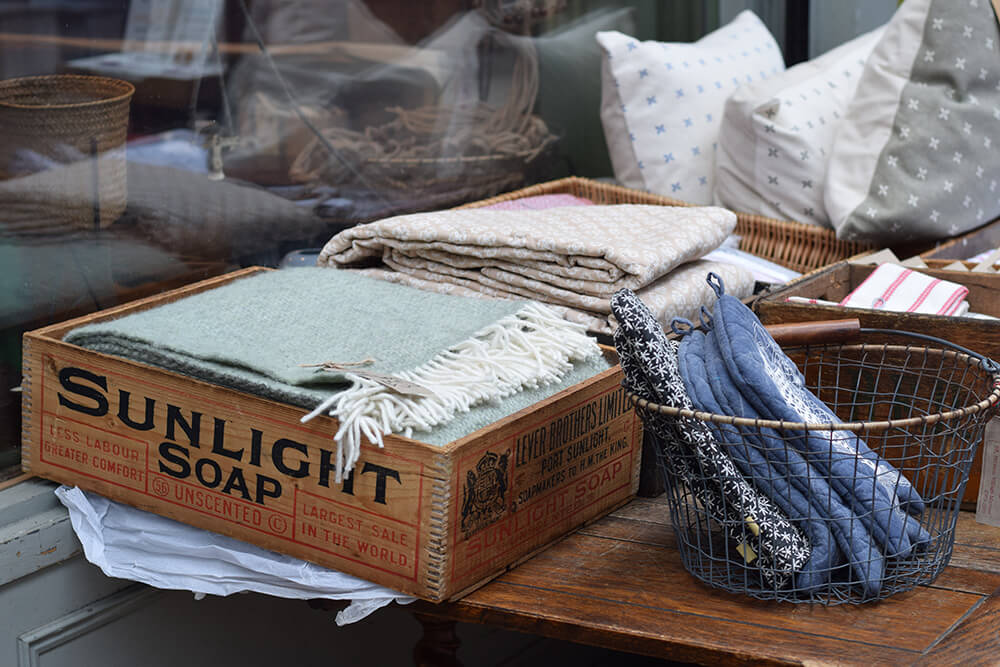 3. Would you say that Cornercopia reflects your own personal tastes?

It very much does, yes. I only choose things for the shop that I really like myself. You have to believe in a product in order to sell it and be surrounded by it all the time. It’s an extension of me.

4.  What is the most popular product you sell?

We sell a lot of Cornish candles, Mali ceramics and a lot of Welsh wool throws. In terms of kitchenware, enamel is really popular. Surprisingly too, feather dusters! We sell a lot of items that a functional but a bit quirky as well.

5. What is your view on using colour and / or pattern in homeware items?

My personal style is paired down – I tend to have a lot of neutrals with splashes of colour or stripes or dots. As pattern goes, I’m quite influenced by geometry and repetition in pattern. Simple patterns such as herringbones, I love and are very popular. 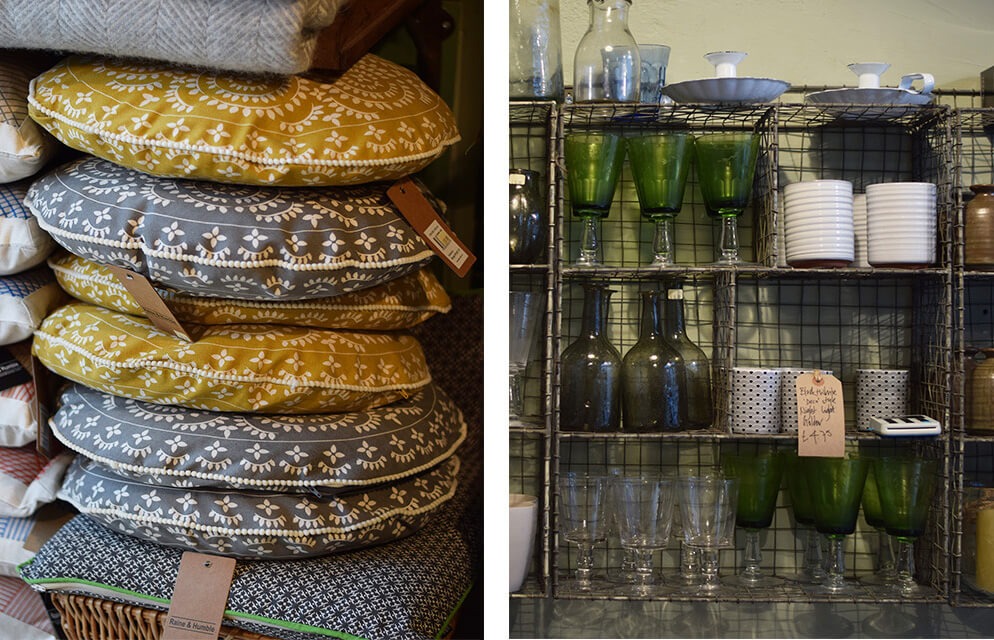 6. How do you source your designers?

Sometimes people come to us, for instance, the tableware with the drawings of animals on are by a local designer. She teamed up with Edwyn Collins, the famous singer. He had a stroke few years back and at the time a form of rehabilitation for him was drawing, and he did all these bird drawings. There is a documentary about him called ‘The Possibilities Are Endless’ because when he was able to speak again after his stroke, it was all he could say. So they are the drawings of his that local designer Katya has used to produce ceramics. There is a wonderful story behind them and we do really like to have products that have got interesting stories to tell. We also have items from a local woman who came to us, who had never sold anything before but wanted to try and experiment selling her ceramics and they are going well. Other things come from slightly further afield, we have some traditional Cornish tableware or throws from Wales. Some things are then from much further away, some items are from India and are made by women in a training workshop. Some items are brought back from our travels.

7. Do you get to see or know much of the design process behind any of these items?

Yes, the Hamman towels for instance. A friend of mine lives in Fez. I’ve visited the workshop where they make them on handlooms and so I buy them directly from the weaver. I sometimes influence the design process in these by choosing the colours.

8. What do you look for when you are sourcing items for your store?

It’s about finding things that are well made. I like companies that have used the same method to produce something for over a century. There is also an emphasis on affordability too. We want to sell things that are good examples of design at a good price.

9. If you could only own one homeware item , what would it be?

It would probably be a woollen throw. It’s a simple thing but it can make a big difference to a room. It can make you cosy and should last forever.

After finding out about all the stories behind each product, I left feeling inspired by Anne’s ethic and passion for homeware goods that are very much design focused. When there are such great stories behind items, it can make even the simplest of objects you own an item that should be treasured forever. If you enjoyed reading about Anne and Cornercopia, why not take a trip there to meet her and Ginger the cat. More information can be found on Cornercopia’s website.

Text and photography by Athina.