Why ESTILA is not available in newsagents

I’ve been recently asked a lot about why ESTILA is not available in newsagents. So I thought I explain our reasons once and for all, and hopefully this will give you an insight into the industry and our decision to go against the traditional way of selling magazines.

We started out as a digital publication three years ago under a different name. One year later I was approached with the suggestion of printing our content and turning it into a physical product. As an industry outsider, I did as much as research as I could before making the decision to go ahead. Of course, it was a big decision to make since printing has much higher running costs attached to it. I was advised to cover them through advertising, which we, until that point, didn’t do in our digital format.

We managed to get the first volume out and it was distributed into a network of over 300 mostly independent newsagents across the UK. I visited 10 newsagents across London which were supposed to stock the volume but I couldn’t find our copies on display. When asked about the publication, the shop assistants said that “they haven’t heard of it”. So I went back to the distributor, raising this issue. I also sent out my friends and connections across the UK to check whether the shops on the distribution list had our publication on display. Only one came back with a picture/ evidence. In the meantime, I was advised to wait until the data and statistics come back, which was 6 months later.

So we released vol 2, however, my gut was telling me to reduce the number of copies that I allocated for distribution. Then, we got the data. And it wasn’t looking good at all. Majority of the copies were unsold, sometimes even they didn’t make it on the shop floor. The way it works is that the distributor decides what publication goes where, based on the local demographic, giving the publication best chance of sales percentage-wise. Which is good from the publisher’s point of view. Makes sense. However, from the newsagents point of you it sucks. They don’t know that they are getting a new publication and in some cases they don’t bother about it. Which is understandable. If I had a shop and someone else was telling me that a new product is coming, which I don’t know what it is and how to sell it, I wouldn’t do much about it either.

Another point, which I already touched on in my Wardour News article, is that the newsagents I visited were not the places where our readers would go. Once I stepped inside one just around corner from Harrods, I knew it was a mistake. I realised that our product needs to be presented in a sophisticated, modern environment and this place was far from it.

From those early days my biggest lessons and the main reasons why ESTILA is not available in newsagents are:

1/ Taking control of our distribution directly to our reader, with no middlemen.
This is something which many people are not accustomed to when it comes to purchasing magazines. We’re forward-thinking and going against the traditional way. But you know what? If you think about it, many other industries have done the same – cutting out the middlemen, especially in retail. Nowadays, we can purchase products directly from designers, whether that’s  wallpaper, a piece of furniture, a dress or jewellery. So I believe that the same can be applied to magazine publishers.

2/ Having control over delivering an exceptional customer experience
By having a direct contact with our readers we can ensure that we provide the best possible customer experience. With each  bookazine we include a personal note and a small gift, whether it’s a recipe card, an inspirational quote or a chocolate sample. We want our readers to feel that we care and that we’re here for them.

3/ Keeping the price competitive
While going through third party distribution, on average the publisher retains only  35-45%, the remaining % is split between the distributor, wholesaler and newsagents. This, to me, is flawed. There are way too many people trying to get a piece of the pie. I’m not saying that they don’t deserve it, of course businesses involved are not charities but the whole system where the only way into national network of newsagents is through such way is not very effective for a publication such as ours.

By eliminating the chain we are able to reinvest everything back into our business while keeping the cover price the same, while costs in general are rising.

By being not reliant on advertising has another benefit – the freedom of content creation. We are not restricted by brands in terms of how we write about them. The stories we produce are therefore authentic, with no underlying incentive. It’s pretty simple: we discover the brands, interview them and share their story in the best possible way.

So these are the reasons why ESTILA is not available in newsagents. I hope that having a direct connection and communication with our readers will be seen as a benefit, and one day magazine purchasing directly from publishers will be a commonplace. 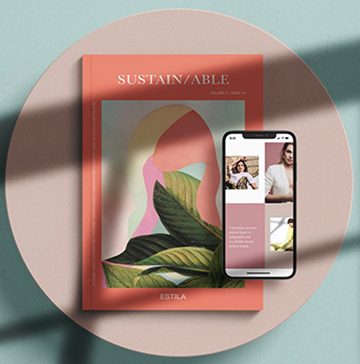 Never miss who's doing what, when and how...